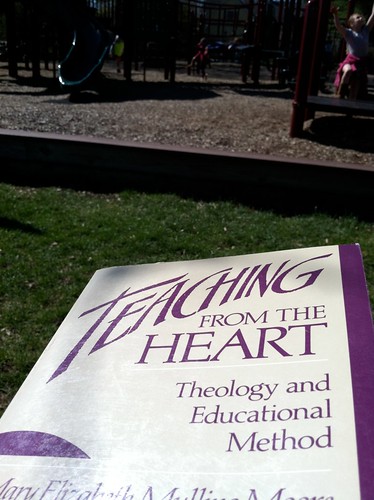 Tomorrow (May 6th) is National Teachers Day, so it’s a wonderful time to reflect on teaching, especially in my context as a liberal religious educator.  Last week I read Teaching from the Heart: Theology and Educational Method by Mary Elizabeth Mullino Moore.   Moore, a professor of Theology and Christian Education, also wrote Teaching as a Sacramental Act (which is on my TBR list, for sure).

Moore’s book stands out among the reading I have done, because it takes both theology and pedagogy (teaching method and theory) seriously and puts them into dialogue with each other.  She raises the point that too often practice and theory are divorced or distant from one another, and that theory in particular is often deaf to the voice of practical experience.  Moore puts one theology (process theology) into dialogue with five different educational methods (case study method, gestalt method, phenomenological method, narrative method, and conscientizing method), and proposes how the theology and the methods would alter each other.

The book, published in 1991, is dated – these aren’t the current “it” theologies or methods – but I think it is still of immense value to the religious educator, placing our work in perspective.  What Moore is really pointing out is that the ordinary, real experience right in front of us can be attended to with care and attention and can influence our entire understanding of everything (our theology). For me, this has always meant that when I work with real people – children, youth, adults – I am open to new understandings of who they are and how they can grow, and that understanding of how to be human is deeply informative to my theology.  I find my truth in the people right in front of me, and in the real experiences I have with them.

That is what it is to be a teacher, seeing the real people in front of you with deep compassion while also seeing the possibilities and holding a passion for growth.  A teacher is a midwife, a supportive building scaffold, and most of all a bridge between the concrete now of experience and the possibility of ideas and future.  In Moore’s words:

“The many and various educators share the common vocation of humanization – the vocation of supporting human life and the quality of that life.”

“This is the gift of a teacher – to revere the ordinary so much that it becomes extraordinarily ordinary.”

In many ways, everyone is a teacher, whether they mean to be or not.  We cannot help but influence one another, and be influenced in return.  But for those who consciously choose this vocation, may it always be a work of the heart.

Perhaps you have heard of Hands On Learning, the educational model that focuses on experiential-type activities for learning rather than on listening or reading to find out new knowledge.

We can have Hands On Religious Education.  Yes, part of that is actually Doing: doing social justice actions with kids, doing earth stewardship actions with kids, or doing church ritual with kids.  But there is also the transformative hands on action of joining hands – forming community.

“Relationships lead to craft, which leads to experiential belief.  That is the path to becoming and being someone different.  The path of transformation.”

What relationships are we giving the children, youth, and adults who come to our congregations?

I serve as your Director of Religious Education (DRE).  This is the terminology that this congregation and the UU tradition has been using for a very long time.  And yet, these two words – religious and education have history and associations with them that have become problematic for many, leading to a trend of UU congregations renaming their programs.  “Religious Exploration” is popular now, as is “Life Long Learning”.  I’ve also heard of programs re-named “Spiritual Development”.

Those who prefer the word Spiritual to the word Religious usually point to all the negative history of organized religion, the association with indoctrination in many people’s minds, and a sense that religion implies external authority and closed-mindedness.  In contrast, Spiritual seems to mean “individualistic” and “independent” to many people.

But strictly speaking, the word spiritual means “of, relating to, or affecting the human soul or spirit as opposed to material or physical things” or “having the nature of spirit; not tangible or physical”.   In its Latin roots spiritus means “of breathing or of the spirit”.

If you look up religious you get the definition “relating to or manifesting faithful devotion to an acknowledged ultimate reality or deity”.  The origins of the word from the Latin religio mean to “bind together” or “place an obligation upon”.  So while spiritual refers to what affects our human spirits, religious refers to what we are called to be faithful to – what our ultimate reality and ideals are and what we are called to do in a community bound together by mutual obligations.

It’s not that I don’t like the word spiritual.   It certainly has its value as well, and part of what we do in the RE program is certainly about the human spirit and its care and development.  But I find the meaning of religio to be a better definition of our learning community, with its sharing of community values and striving to honor the call to build beloved community and a better world.

Moving on to education, I find the arguments against the word laid out very well in the book Letting Go: transforming congregations for ministry by Roy D. Phillips.  Here, Phillips lists three reasons not to use the word “education”: 1. It is associated with just adding to a person’s stock of knowledge, 2.  It is associated with someone full pouring their bounty into someone empty, 3. It is the inculcating of community norms.  For these reasons, Phillips urges congregations to rename their programs “spiritual development”.

But the root of the word education is from the Latin educare meaning “to draw forth”.  Development means “a specified state of growth or advancement” and probably comes from the Old French desveloper meaning to “unwrap or unfurl”.  Perhaps education has those negative associations with the word – basically associations with some of the less-enlightened ways we have tried to educate each other over the centuries.  But I still believe in educare – to draw forth something with some sense of intention.

And you might notice something with each pairing of words: religious is more about community than spiritual, education is about a relationship between the one who draws forth and the one being drawn forth while development could be a completely individual process.  The older phrase is about a community process, while “spiritual development” does imply more individualism.  In the context of the rampant individualism of our society, holding to the old words says that we still value community and the relationships between people in a learning community.

Words are tricky things.  In the theology course I recently took the lecturer remarked that theologians are always playing at the edge of established language, and have two choices: to make up a new word or to reclaim or redefine an old word.  We can turn to new words to signal our intentions, such as saying Spiritual Development because we want to break with the negative notions of filling children up with a closed-end authoritative doctrine, or we can redefine what we mean by Religious Education and say that we mean to “draw forth that which binds us together in ultimate value, reality, and meaning”.

As American Unitarian Universalists, we have inherited a long tradition of congregational polity.  Basically, I explain to the kids that this means we are organized and governed at the level of local congregations.  The decision-making and governing authority in a UU congregation is the congregation itself, based on the democratic processes of its membership body.

Taking part in congregational decision making is part of how one engages with their UU identity – we are a people who get a vote and a voice.  I think it’s important for our kids to also experience this in their religious education program.

Each year for the last three years I’ve held a Children’s Annual Meeting in the spring.  I blogged about the first year of it back on my other blog, The Curriculum of Love.  Each year I’ve repeated that basic process, with three committees and a simple voting process to choose where to  send the Children’s Offering money.

It is honestly one of my very favorite things I do with the kids all year long.  Every year, they have been actively engaged in this process.  The kids seem interested – in fact one of the adults helping this year said afterward “kids really like committees!”.  I think they experience some genuine empowerment through getting to make real decisions.

I think a democratic RE program is so important, in fact, that I’m wondering if next year I couldn’t hold two meetings, one in the Fall and one in the Spring.  What other decisions should the kids be making for themselves?